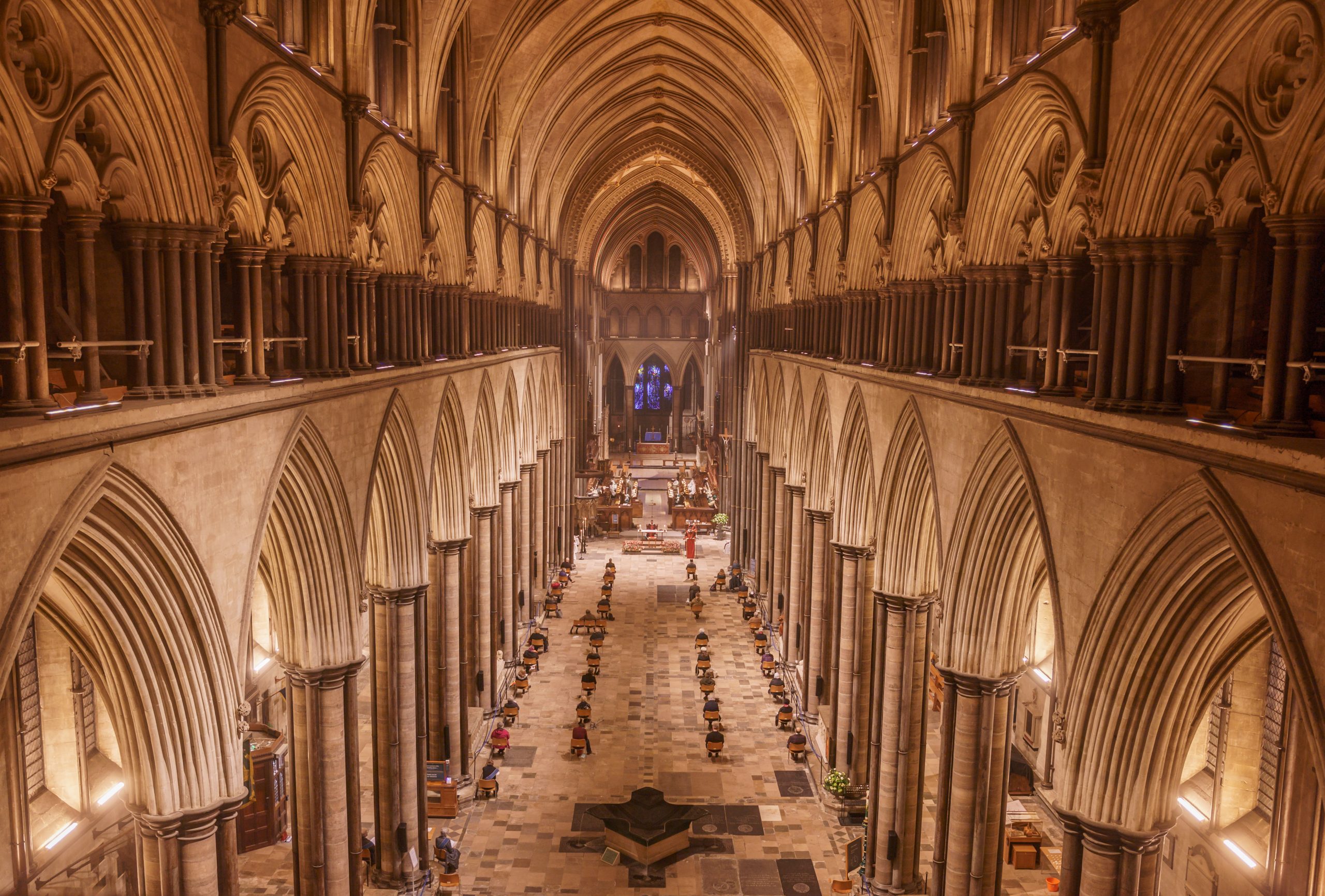 Salisbury Cathedral has a unique story. Salisbury is the Cathedral that moved.

More than eight hundred years ago, our medieval counterparts were given permission to leave the site they had occupied at Old Sarum since shortly after the Norman Conquest. There they had built – and rebuilt – a Cathedral. But on 28 April 1220 the foundation stones of a new building were blessed, on a level plain where five rivers meet, two miles to the south. A Cathedral was built, and a city was built around it. This was to become New Sarum, or Salisbury.

Salisbury is the Cathedral that moved. It is from this unique foundational story that Salisbury Cathedral derives the values that underpin its life, and shape its plans. These values are Liberty, Creativity, and Eternity.

The story of the move is above all a story of the Church’s bid for liberty. The cramped hilltop at Old Sarum was overlooked by the royal castle and its garrison. Visitors – and Cathedral clergy – would sometimes find their paths to the church’s doors blocked by the King’s soldiers. Being so close to royal power was downright dangerous for the Church: in 1170 Archbishop Thomas Becket was murdered in Canterbury Cathedral by knights professing loyalty to the King. So, the move from Old Sarum was a courageous bid to remove the Cathedral from the immediate reach of the unchecked power of medieval monarchs. Coincidentally, when the community’s treasures were transported down the hill they included Salisbury’s copy of Magna Carta, agreed by King John only a few years earlier. Salisbury Cathedral – like Magna Carta – remains a symbol of resistance to arbitrary authority. The Prisoners of Conscience Window, glowing at the east end of the building, reminds us to pray daily for all who suffer at the hands of unchecked power.

The move released an extraordinary explosion of creativity.

Within just four decades the new Cathedral was complete. It was dedicated in 1258, the work of one generation. It is barely believable that the arches, vaults, and buttresses we see today were raised in so short a time. And this ambition was not limited to the building of a Cathedral. They built the city around it. New Sarum was laid out in a well-conceived plan – a sacred enclosure (the Close) connected to a commercial enclosure (the market square) connected by a High Street, with adjoining streets and their buildings designed as the ‘chequers’ which can still be seen today. What was begun in 1220 has never stopped. Our generation continues to build and rebuild Salisbury Cathedral. Stone masons and glaziers based in the Works Yard use methods and skills that their medieval coleagues would recognise. This is still a place of abundant creativity in a variety of media – heritage crafts and music, but also visual arts and interactive visitor engagement.

But none of this would have any meaning if it were not for the core purpose around which the Cathedral was built. Eternity, that Christians recognize as God, made known in Jesus Christ, to whom worship is offered and prayers are said at least twice a day, every day of the year.

When we open the Bible the very first thing we learn is that God is the creator of everything that is. When Jesus Christ came to Nazareth he declared that he had come to set the prisoners free. When we acknowledge that our lives begin in God and end in God then we acknowledge our non-negotiable relationship with – and dependence on – eternity. Salisbury’s story is a reflection of God’s story.

Christians believe that if human beings live free from the abuse of arbitrary power, if they discover and exercise the creative gifts that they have, whatever those may be, and if they live in relationship with God, then they will flourish and live abundantly, just as God intends them to live.

It is for these reasons that Salisbury Cathedral is proud to champion liberty, practice creativity, and to seek a deeper relationship with eternity. That is our value-shaped mission, and we invite you to join us in it. 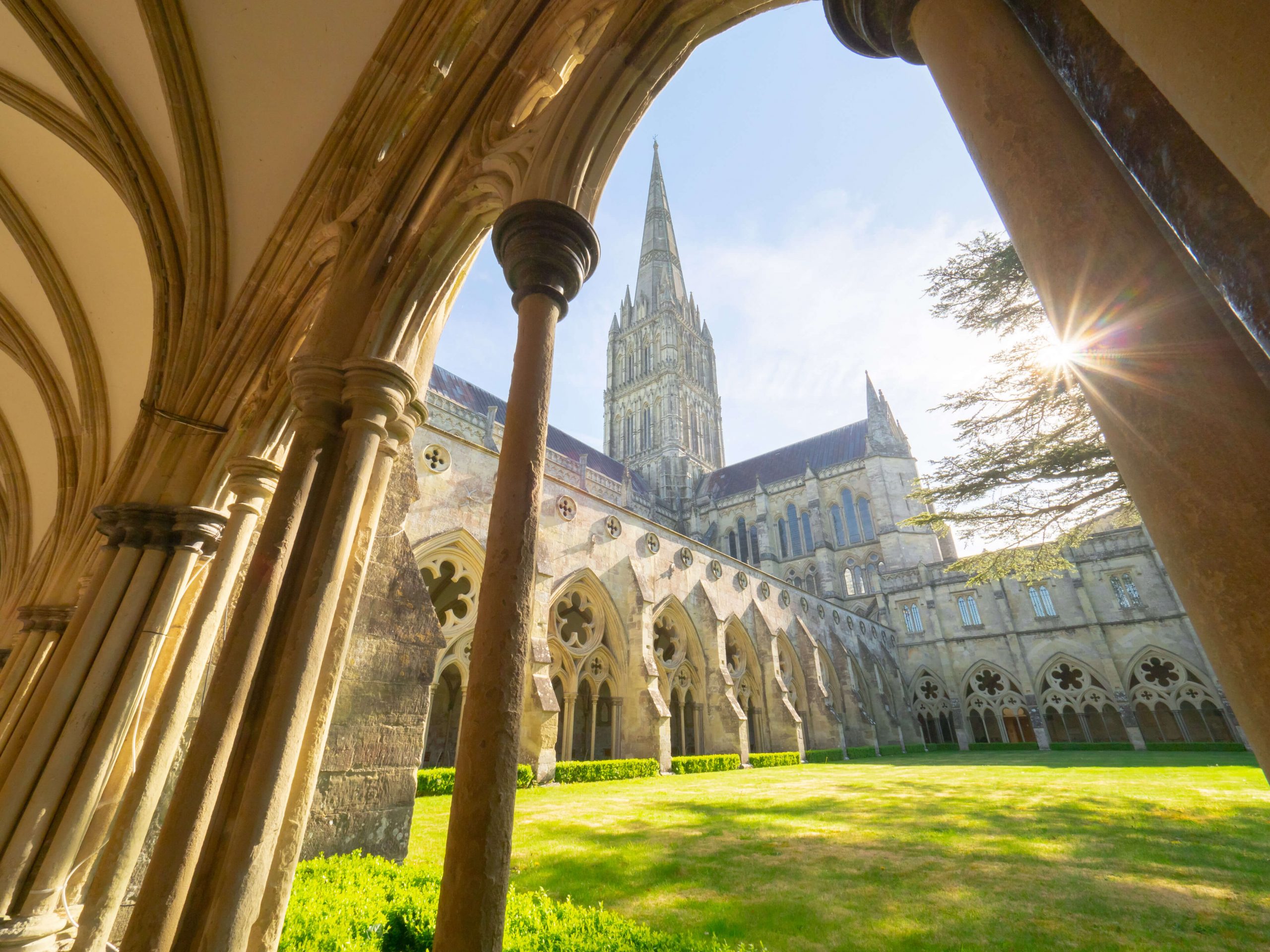 Join our congregation and wider community