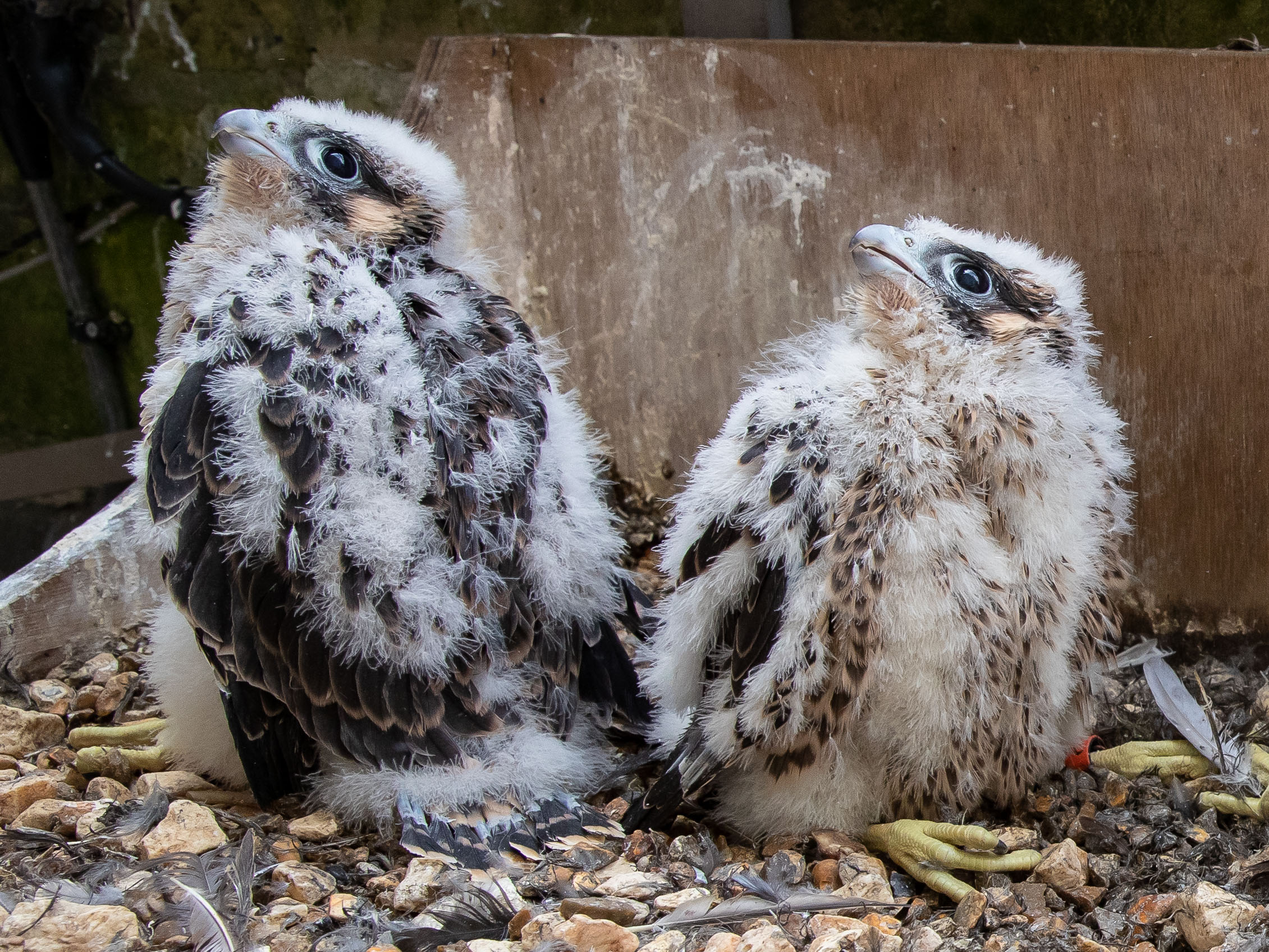 It has been a while since I wrote my second blog of the year at the end of April; my excuse is that I have been on holiday for two weeks in Scotland, a week on the Outer Hebrides and a week around the Cairngorms. It is interesting to note that on a two week, exclusively bird watching trip, we only saw a single Peregrine; a Snowy Owl on North Uist was some consolation however!

Leaving aside the strong likelihood of seeing one of our Cathedral falcons over Salisbury at almost any time, it is probably quite likely that in two weeks of birdwatching on the down-lands of Wiltshire at this time of the year, I would have seen more Peregrines than I did in Scotland. Certainly on the west coast and the Outer Hebrides the generally low density of prey species is very noticeable compared with the numbers seen in the ‘softer’ and warmer south. Whilst there are genuine wild Rock Doves there, the numbers of Feral Pigeons and corvids, a staple food of ‘our birds’ are so much lower. There is also evidence that Peregrine numbers, especially in Scottish coastal areas are, adversely affected by the picking up of marine pollutants and pesticide residues from the seabirds on which they sometimes feed, a problem which is unlikely to impact to any great extent these days on our inland, and especially urban populations of falcons in southern England. 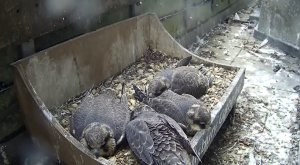 But I digress, let’s get back to our Cathedral birds. From what I have seen from viewing the webcam, they have certainly been busy bringing in lots of prey to feed their fast growing brood of four chicks. My impression is that this has mostly been Feral Pigeons, corvids; probably Rooks and Jackdaws, Starlings and some smaller prey items which are hard to identify with any certainty. The odd coloured ring from Racing Pigeons have also been seen which confirms that very small numbers of these are also taken. In recent years, shortly after the chicks have fledged, the adult falcons have preyed quite extensively on Black Headed Gulls. I do not recall this happening much in early years of the falcons reoccupying the cathedral as a nest site; perhaps it is the particular pair in occupation recently which have a penchant for hunting gulls; the next couple of weeks might shed some light on this. Of course, as both current adults are un-ringed, we can never be sure whether both or indeed either of the birds in occupation are the same as in previous years.

As is often the way, there is always the initial thought that the smallest chick seems to be the last in the food queue so to speak; indeed on the day I wrote my previous blog I did it whilst actually watching the last chick emerge from its egg. That said, in our Salisbury urban environment with a plentiful supply of prey species relatively close at hand, there always seems to be enough to go around, and every year our understandable concerns about the last hatched and smallest chick are unfounded and it fledges successfully with its older siblings. It is interesting to note, that with the exception of in the year 2016, all eggs which have hatched have produced chicks which have successfully fledged. In 2016 two of the four hatched chicks perished at a fairly early age, quite possibly due to a spell of wet and cold weather. 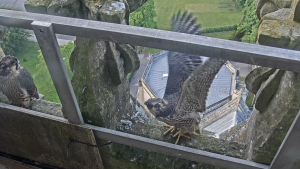 As regular followers of the cathedral website and Facebook group will know, the four chicks were ringed on 23 May. Each, as in previous years, carries two rings. One an aluminium ring from the British Trust for Ornithology (BTO), and the second, a coloured Darvic plastic ring on which are large letters/numbers. The former enables the origin of bird to be identified in the hand so to speak, almost always, but not exclusively, when a bird is sadly picked up dead. The latter, the popularity of which has come very much to the fore in more recent years, especially with improved optics and digital photography, is to enable birds to be identified when alive in the field. The most recent example of this was of a 2020 fledged Salisbury Cathedral chick named Osmund (blue Darvic ring YK) who was photographed alive and well on Guernsey in spring 2022. This year all of the chicks were named after royal pets and given orange Darvic rings. The details of the chicks and their rings are listed below. As with adult birds, even at this stage of their development, female chicks are substantially larger than their male siblings. 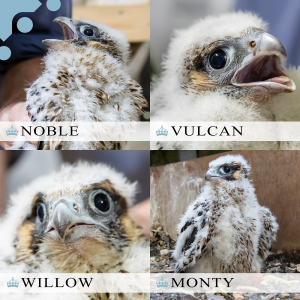 The second week in June, as in most previous years, sees the start of the month long Peregrine ‘Date with Nature’ event held outside of the west front of the cathedral and run by the local Salisbury members group of the Royal Society for the Protection of Birds (RSPB) in conjunction with the cathedral. This gives members of the public, and indeed visitors from all over the world, a chance to watch the Peregrines through the two telescopes set up to watch the birds. The event runs every day apart from Sundays from 7 June to 1 July; the only other exception being no event on 30 June. Telescopes are manned by the group from about 11.00am to 4.00pm. I was ‘on duty’ yesterday, 13 June, and there was plenty of activity to see, with both adults and at least three of the chicks; both males and one female flying around the cathedral spire. We are not sure whether the second female chick has taken her first flight yet; unless both female chicks are seen in the air together it is hard to be certain. 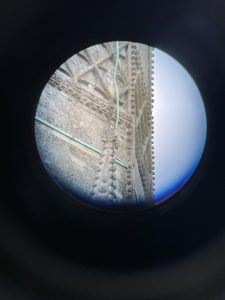 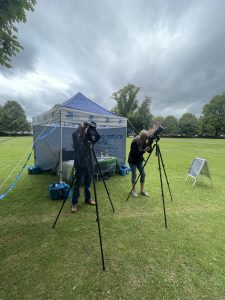 One female named Vulcan certainly has, as one of the employees from the stone masons yard came across to speak to us and showed us a photograph of her on his mobile phone. She had apparently been found earlier in the morning sitting beside the road near the yard. He had picked her up (wisely wearing gloves) and carried her to the safety of the yard and sat her on the back of a chair to keep her off of the ground and take the photo; her orange Darvic ring X7C enabled him to identifier her. Later, Gary Price, the Clerk of the Works at the cathedral also came across to confirm this story. The bird was still on the chair back when he saw it and was being attacked by a Blackbird who was I imagine nesting nearby. Gary did say that the Blackbird actually hit the falcon on the head; not the sort of thing I imagine the Blackbird would do if the falcon was above it in the air if it knew what was good for it! The falcon was apparently last seen flying low out of the yard so presumably is none the worse for the experience.

Such excitements cannot be guaranteed every day, and perhaps just as well! That said, a visit to the ‘Date with Nature’ event until the end of June is almost certain to give you great views of both the adult and juvenile falcons. So why not come along and see these magnificent birds in the flesh so to speak, you will be most welcome and you will certainly not be disappointed.