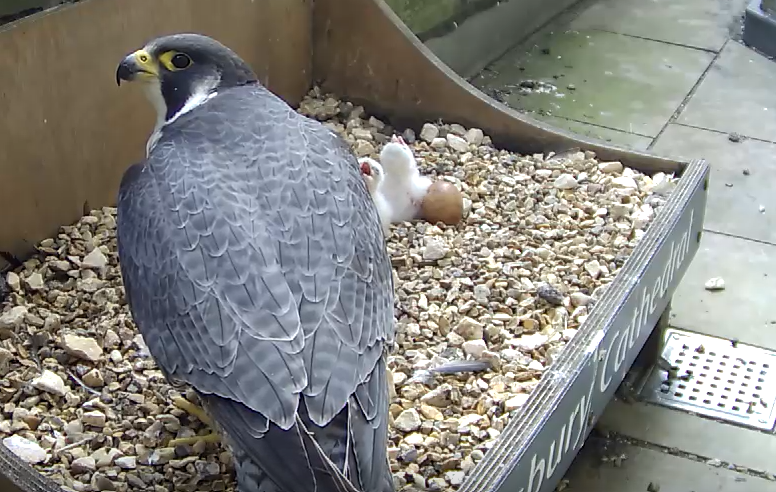 Regular viewers of the cathedral website will have noted that in my last blog dated 31 March 2022, that I anticipated the Peregrine eggs would hatch ‘somewhere around 27 or 28 April’. In the event the first two eggs hatched on 26 April, the third on 27 April and I first caught a glimpse of the fourth chick as I was typing this blog on 29 April. This fourth chick looked as though it had just hatched when I first saw it, as it was still wet from having emerged from the egg and its first white coat of down had not yet dried out. Whilst it is not unknown for all chicks to hatch on the same day, they do normally hatch over several days, in this case four.

I suspect this is because the earliest laid eggs may have developed slightly faster than the later ones even although incubation probably did not start in earnest until the last egg was laid. In addition, it takes quite some time for each chick to actually hatch. It is well known that the adults and chicks communicate through the eggshell shortly before they begin hatching. The time from a chick making the first chip in the egg with its egg-tooth until actually emerging fully from the egg is normally around two days but can extend to three which may also explain the differences.

It was interesting to note watching the webcam that shortly after the fourth chick hatched, the female falcon was seen nibbling at the empty half eggshell which the chick had just vacated so to speak. This seems to be quite a common thing to occur and it is thought that perhaps this is the adult ‘topping up’ its supply of calcium from the discarded eggshell as it were. I noticed that one of the older chicks also nibbled the discarded eggshell but, as its eyes are probably not yet open; they tend to open after about four days, whether this was of any significance I do not know. Unlike many songbirds which take their discarded eggshells well away from the nest, presumably to help deter predators from finding it, this does not seem to happen with Peregrines. Discarded eggshells which do not get nibbled tend to lie around the nest and in most cases eventually get trampled on and broken into small pieces by the rapidly growing chicks.

As viewers of the webcam will have noticed, apart from when being fed, the chicks are very closely brooded almost all of the time, mostly by the adult female. This is because in their early days of life the chicks are not yet able to regulate their own internal temperature. This continues normally for at least the first week of their lives and can continue beyond that if the weather is very cool or wet. The weather in Salisbury for the last few days and certainly that forecast for the next week looks fine, albeit not terribly warm but most importantly mainly dry.

Persistent wet weather is a real problem for Peregrine chicks in their early days of life, especially when they are still in their white down coats before their proper feathers grow. We are lucky on the cathedral that the nest box is protected from the worst of the wet weather by the parapet wall on the south face, and we also have a sun shield on the same parapet wall to provide some shade when the weather gets really hot; chicks can die of exposure to excessive heat as well as from exposure to cold wet weather.

Now that the chicks have hatched, viewers will see rather more activity at the nest cam as has been the case for about the last month or so whilst the eggs were being incubated, although, as I mentioned above, between feeds the chicks will mostly be brooded by the adult female. Nonetheless, there will be activity when prey items are brought into the nest by the adult male and it is always wonderful to see the care with which the adults feed tiny morsels of food to their newly hatched chicks.

As I have noted in past years, it does seem to be the case that the male brings in mostly quite small prey items at the early stage of chick development before moving onto much larger items as the chicks grow. Quite why this should be so when a large prey item would last much longer so to speak I don’t know; maybe it is just coincidence at the time I am watching the live camera feed. When not being fed, the chicks seem to spend most of their time sleeping under the brooding female. After about ten days or so when the female ceases to brood the chicks so much, especially in fine warm weather, they will be much more visible, almost always bunched up together in a white ‘heap’ to keep themselves cosy, and yes, still mostly asleep!