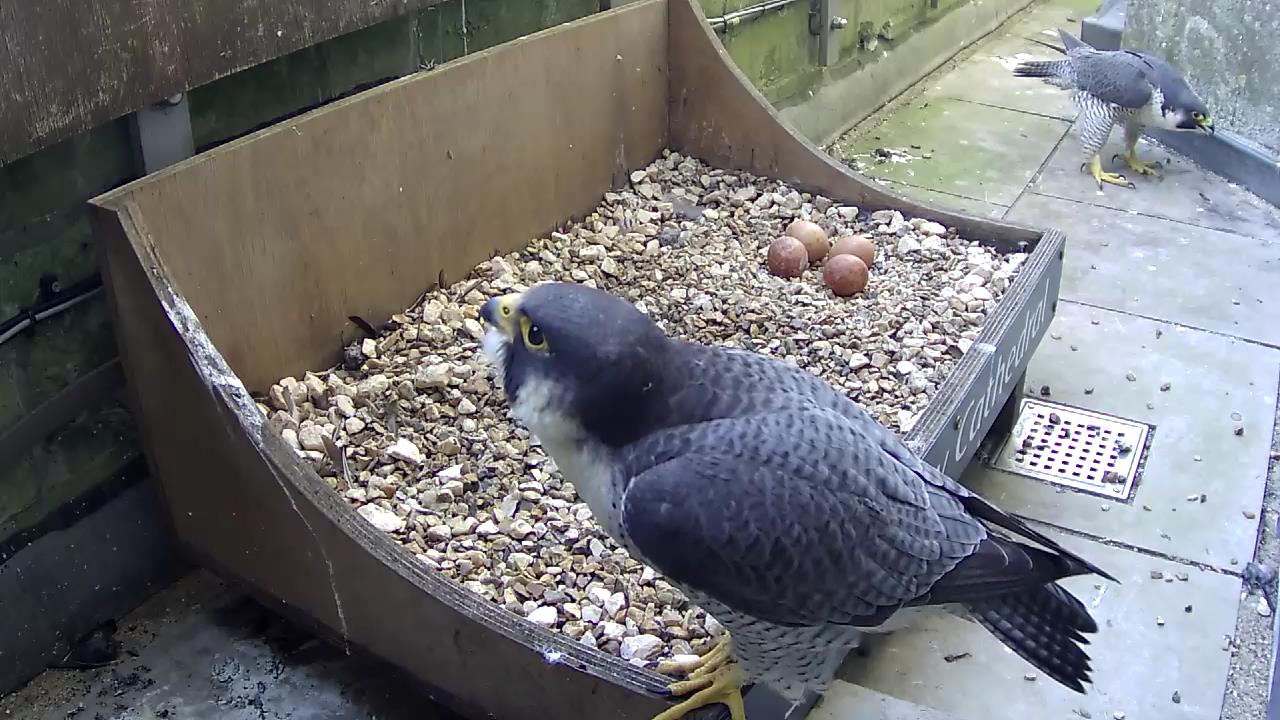 How time flies, it seems only yesterday that I penned the first Peregrine blog of 2021, and yet here I am again, putting pen to paper, or more precisely fingers to keyboard to start commentary on the 2022 breeding season. Both of our birds are, as in 2021, are unringed, so we can never be certain whether one or other, or indeed both has been replaced during the preceding autumn/winter. Individual Peregrines, be it adults or juveniles, very rarely have distinguishing plumage details, so in the absence of rings, telling birds apart, except for the obvious size difference between males and females, is almost impossible. What we do know, is that the birds have followed the recent trait of egg laying in mid-March. Last year the first egg was laid on 15 March, this year a little later on 19 March; the event spotted by an eagle-eyed web cam observer just this side of midnight!

It is interesting to note that prior to Peregrines frequently nesting in urban environments on man-made structures like the cathedral – in itself a relatively recent trait – historical data from southern England, from sea cliff nests, suggests a date of first egg at the very end of March or more typically in early April. Whether this current general early laying (some pairs do still lay a little later) is linked to the ready availability of prey in urban environments, or possibly climate change is not clear. Recent evidence of some songbirds nesting earlier and migrants like Swallows arriving earlier in the UK in recent years might give some credence to the climate theory. Interestingly, a Swallow overwintered during the winter just passed at a bird reserve in west Cornwall; a sign of the times perhaps? 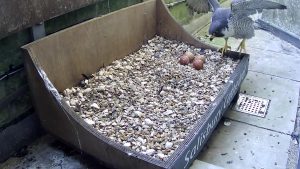 By way of a slight digression, historical data on ‘date of first egg’ was in many cases derived from the days before bird protection legislation came into force and egg collectors systematically ‘farmed’ Peregrine eyries, particularly on the south coast of England. In counties like Dorset, Kent, and particularly Sussex, in many years, every known accessible eyrie was plundered, with the whole clutch present being taken. The competition amongst egg collectors to take these clutches was often considerable and many incomplete clutches were taken on the basis of ‘if I don’t take what egg(s) have been laid now, if I wait for a complete clutch, someone else may beat me to it’. Numbers of these, presumed incomplete clutches, are now in museums, and as collectors were often meticulous in labelling the date the clutch was taken, it is possible to get an approximate date for date of first egg by counting backwards allowing two days between laying of each egg. Thankfully, these days are now long gone and the modern advent of webcam as we have at the cathedral enable us to establish very accurately, often to the hour, the date of first egg in these modern times.

As I type, it looks as though ‘our’ female is going to lay four eggs this year, the last being on 27 March. Four eggs is very much the usual clutch for the cathedral birds although we have had clutches of three and exceptionally five eggs in previous years. It is thought that incubation normally only starts in earnest only when the final egg is laid, this ensures that all of the eggs hatch within a day or two of each other. This would give a likely hatching date of somewhere around 27 or 28 April.  Regular watchers of the webcam will have noted that, during the day, and particularly at night, the female in particular has often been seen to be sitting on the eggs well before the clutch of four eggs was complete. It would seem that this is probably just some form of protection for the eggs prior to incubation starting in earnest.

On the occasions I have looked at the webcam during the hours of darkness, and prior to incubation, whilst the female has often been sitting on the eggs, on other occasions she has been seen standing over them with the eggs clearly visible, and rather fitfully roosting, often rousing from time to time to have a shuffle around. Some species of birds, and it is thought to include Peregrine Falcons, can roost with one eye open and half of their brain alert so that they can be immediately aware of impending danger and react quickly. For the technically minded amongst you, this is known as unihemispherical slow-wave sleep (USWS). Mmmm…. aren’t you glad that when you go to bed and close both eyes, hopefully, on a good night at least, you are not woken from your slumbers until the alarm clock goes off!!!