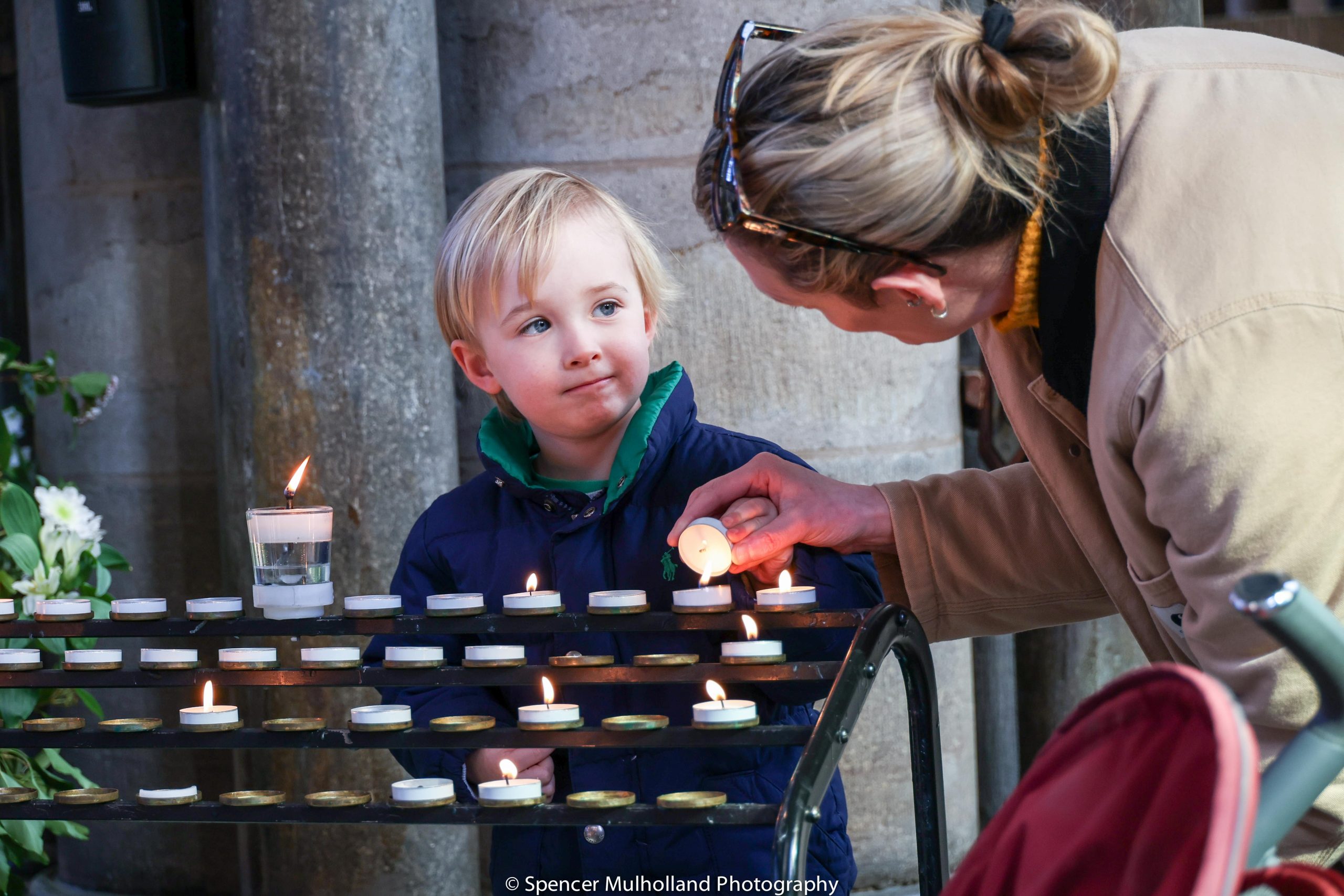 A Sermon preached by the Precentor, Canon Anna Macham

For many years, the Saturday morning Radio 4 programme Saturday Live, featuring the Reverend Richard Coles, has had a feature called “Thank you,” during which members of the public call in to say thank you to people for kind acts done to them in the past- sometimes decades and decades ago- and who they didn’t get a chance to thank at the time.  I don’t normally listen to this programme but catching one of these stories by chance on my way in from taking Saturday morning services at the Cathedral recently got me thinking, and reminded me of my own gratitude story I’d long since forgotten about.

Before coming to Salisbury, I worked in South East London for over a decade, and for the first part of that time lived in a ground floor flat in Bermondsey.  I loved living there, but one evening I was on the phone to Rachel, my partner, when the doorbell rang.  When I answered the door, still on the phone, it was a police officer, who informed me that someone was trying to break into my flat.  Hurriedly telling Rachel I’d phone her back, we went into the spare room to discover a bent open window and a large footprint on the desk next to my computer.  It turned out that a neighbour, who I didn’t know, standing out on the balcony of the flats opposite, had seen a man breaking into my flat and called the police.  The man had run off, thankfully, possibly due to the neighbour shouting at him from the balcony- I don’t know.  The police officer told me he’d find out who the neighbour was, but for some reason that information never seemed to get recorded and I never did find out.  But I was very grateful for their help and the action they took.

I guess we’ll never know, from the story of the priest, the Levite and the Samaritan, in the Gospel reading we just heard, whether the injured man ever got chance to thank the Samaritan for what he did.  This story is so well known, and has been interpreted so many times, and in so many different ways down the ages, from Augustine allegorising it as the Samaritan representing Christ, who saves the sinful soul, with the inn being the Church, to Margaret Thatcher using it to defend capitalism.  But the details given in the story itself are actually quite sparse.  We don’t know who the priest, the Levite and the Samaritan were, beyond those labels, and we find out even less about the victim of the crime, “a certain man,” who gets beaten up and left for dead.  The man is simply a human being, a neighbour, in need.   I can only imagine that strong sense of “gut wrenching” compassion that the Samaritan felt, and demonstrated, in his actions, was matched by the gratitude of the wounded man, when he finally woke up in the inn, to find not only that the Samaritan had saved his life but that his ongoing needs had also been taken care of by the Samaritan’s generous response of salvific care.

The story of this compassionate Samaritan begins with a lawyer asking Jesus a question: “What must I do to inherit eternal life?”  Jesus believes that the lawyer can answer his own question, and so turns the question back to him.  The answer: “You shall love the Lord your God with all your heart, and with all your soul, and with all your strength, and with all your mind; and your neighbour as yourself.”  This so-called Golden Rule is the bedrock of Christianity, and- in its basic sentiment- of many other world faiths too.  Its demand on us to love God so completely is an emotional one, involving heart, soul, strength and mind, and this love of God evokes an equally emotional response to people.  The Samaritan, in the story that follows, is “moved with pity.”  This is less earthly than the Greek original, which literally translates “His guts were churned.”  It’s not in our brain or heart that we feel compassion, but in our guts, according to the bible, the sort of response we have to news of casualties in war, or victims of famine.  The impact of seeing another human being in pain is “gut-wrenching.”

But the lawyer is caught up in the details.  Who is my neighbour? he asks.  Rabbis of the time debated whether love for one’s neighbour meant love for fellow Israelites only, or whether this love should be extended to other races and nationalities as well.  For some, “neighbour” was a limited term, with endless discussion about which classes of people the Law excluded from the scope of the commandment.   A long history of enmity between Israelites and Samaritans meant that the high-status priests and Levites regarded the latter as half-breeds or dogs, despising them as unclean sinners because historically they had intermarried with other races and indulged in pagan practices.    By contrast, priests and Levites, like this lawyer, regarded themselves as people of exemplary piety, self-evidently righteous in their behaviour, due not to their training or skill but to their ancestry, having been born into priestly families.

Jesus tells the story of the compassionate Samaritan to challenge this tribal consciousness.  Many of those listening would quite naturally have assumed that the unknown injured man was a sinner, or at least that he could have been.  They would, most likely, have thought that the priest and the Levite were right to keeping walking, or at least have sympathised with their desire not to get involved a dangerous situation.  By helping the lawyer to reframe the question not as “Who is my neighbour” but “Who acted as a neighbour,” Jesus challenges not just the lawyer, but his listeners too.  The Samaritan’s response was exemplary.  What would they have decided to do?

It’s been interesting, speaking extensively to some Ukrainian friends I’ve got to know since they arrived in this country a few months ago, about this tribal mentality.  The problem in Ukraine and Russia, in their eyes, is not as simple as an evil dictator, but a way of thinking that has evolved over decades whereby people of one nation are urged to think of people in another, neighbouring one as being lower status, of questionable morals or worth less, or culturally inferior.

To break down this us and them thinking is very difficult, and not something that can happen overnight- especially when people have a lot invested in it, and it’s been engrained in them for years and years.  The story of the compassionate Samaritan is about doing something.  But sometimes it’s hard to know what we can do.  My new Ukrainian friends say that talking about it helps- at least listening to other people’s stories and their very different experiences is something we can all do.

Art has a role to play here.  Grayson Perry’s magnificent, colour-filled series of tapestries which are displayed in the Cathedral around us at the moment, follow another dramatic journey, the progress of Tim Rakewell in a tale of social mobility and acquisition of wealth that ends with his unfortunate death in a road-accident that he causes.  Like the first hearers of the story of the Samaritan who knew that road from Jerusalem down to Jericho so well, like the back of their hand, it’s the everyday details- the fag packets, the literary mugs and designer bags- that place us- the viewers- right in the middle of the scene, that make it a story not just about other people but about us.  According to Perry, everyone is tribal- it’s part of human nature.  But, by gently poking fun at our taste and our class habits, the objects that define us and are the markers of our station in life, Perry challenges us to recognise that these things, though, on one level, so emotionally charged and personal, are also superficial.  Belonging is important; being part of a tribe gives us our identity.  But it shouldn’t lead us to deny or disrespect, or fail to acknowledge, the human dignity of others.  We live in a diverse society and world. We are all human, and we have a choice about how we treat each other.

Paul’s letter to the Colossians, the start of which we heard as our first reading, is a majestic work, in which Paul describes his vision of Christ, of the church, and of the mystery of God hidden for ages.  Later in the first chapter, he reminds us that once we ourselves were “estranged” from God, God’s enemies, until God’s love saved us through Jesus.

To love not just our neighbours, “those like us,” but our enemies too, is hard.  Stories help.  As the art critic Jenny Uglow says of Grayson Perry’s work, “Stories often offset fear.” (Grayson Perry: Marking Meaning by Jenny Uglow).  Stories like the very human story of the Samaritan move us in our guts, compelling us to listen and hopefully to act.  It’s tempting to simplify today’s Gospel, to make it about the “good” compassionate Samaritan versus the “bad” hard-hearted priest and Levite.  But the anonymity of the victim and the exemplary character of the Samaritan mean that this could be story about anyone.  Whoever is the victim and whoever has the power to help, this is what love looks like.  This is what God’s love looks like.  This is what being a neighbour means.

The Vanity of Small Differences is jointly owned by the Arts Council Collection, Southbank Centre, London and the British Council Collection. Gift of the artist and Victoria Miro Gallery, with the support of Channel 4 Television, the Art Fund and Sfumato Foundation with additional support from Alix Partners.