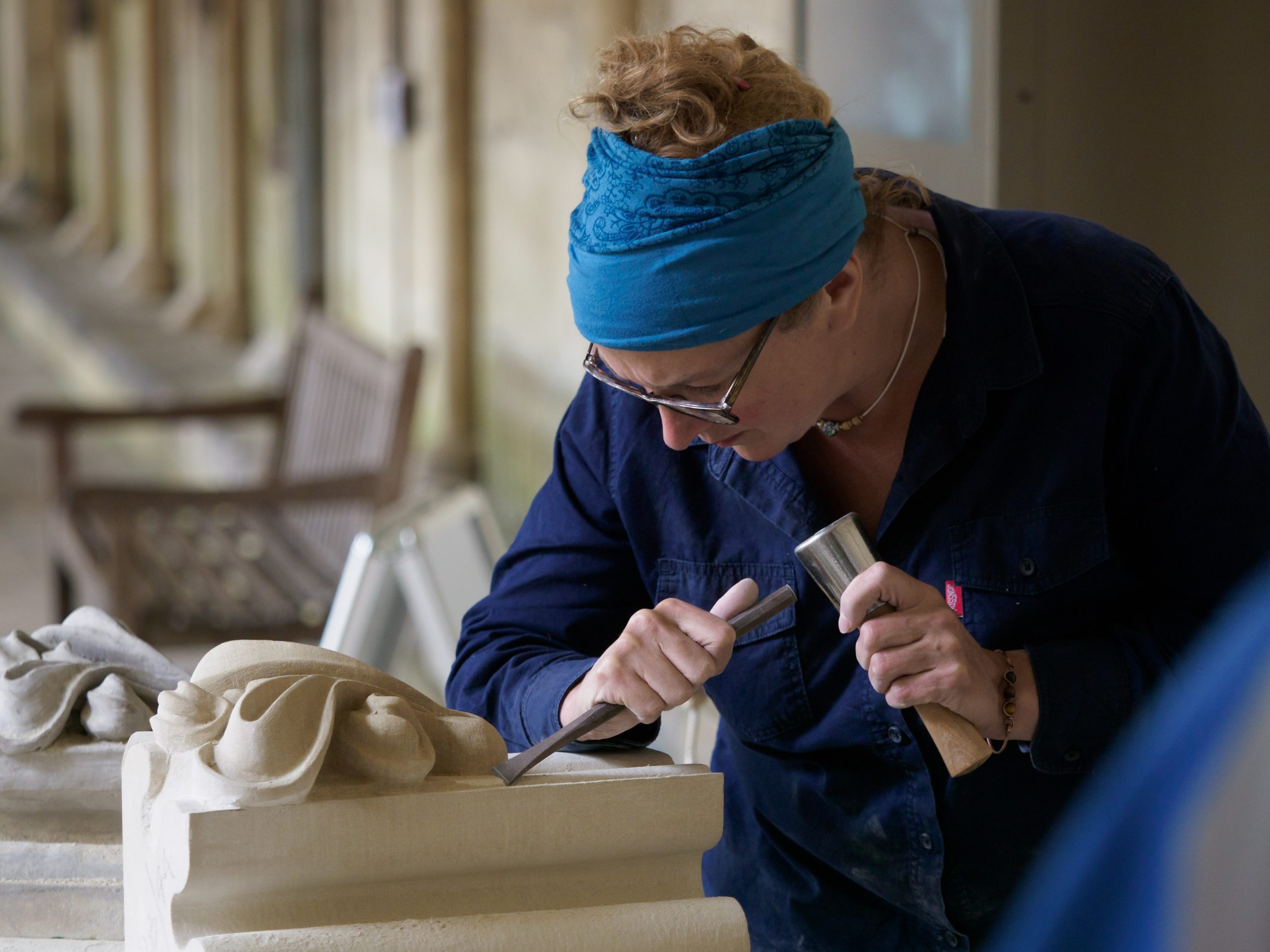 Reflecting on International Women’s Day, we can explore the lives of the many women in the past, present, and future of Salisbury Cathedral. Women’s stories have typically been overlooked, so to take this lens of reflection – let’s call it Salisbury Cathedral’s ‘herstory’ – is quite an inspiring task. Whether public figures or unsung heroes, women have been connected to Salisbury Cathedral from the very beginning. These women may not have been represented in history as thoroughly as their male counterparts but in a medieval, male-dominated, feudal society this is no surprise. They may be lesser known, but they are certainly not forgotten and despite the societal pressures placed on medieval women, powerful figures still emerged whose very presence challenged the expectations confining them.

One such figure, who stands out for challenging our preconceptions of what it was to be a medieval woman, is Ela Longespée. Ela’s remarkable story is literally built into the very foundations of Salisbury Cathedral, where she and her husband, William Longespée, laid the 4th and 5th foundation stones on the 28th April 1220. As Countess of Salisbury in her own right, her husband William assumed his title as Earl of Salisbury only upon his marriage to Ela. Her wealth and affluence were completely her own and her estate was vested in her own name. After her husband’s death, Ela poignantly chose not to remarry. Considering her wealth and social standing, this was highly unusual for the time. What’s more, Ela assumed the position of Sheriff of Salisbury – a position that often has masculine connotations.

Ela founded Lacock Abbey and Hinton Priory, laying the foundation stones for both in the same day, travelling 16 miles on horseback between them. She was actively involved in the running of Lacock, seeing to it that the Abbey and the surrounding village flourished; before long, becoming the first Abbess of Lacock. Recognised for her own accomplishments, as well as her partnership with William Longespée, Ela’s epitaph in Lacock reads:

‘Below lies buried the venerable bones of Ela, who gave this sacred house as a home to the nuns. She also had lived here as holy abbess and Countess of Salisbury, full of good work.’

A towering figure in her time, Ela’s story is not confined to the achievements of her husband, she carved a well-deserved place for herself in Salisbury’s history.

It is no secret that within the Cathedral’s cavernous, intricately carved interior there are many treasures to be found. Sitting proudly in their midst lies the grandiose tomb of Helena Schnachenberg Gorges Marchioness of Northampton. Swedish born Helena came to England as a Maid of Honour in the retinue of Princess Cecilia of Sweden. After a short-lived marriage to Sir William Parr, the Marquess of Northampton she was widowed, retaining her title and a substantial dower. Having grown fond of Marchioness Helena, Queen Elizabeth I awarded her a place at court. Here, she caught the attention of a knight by the name Sir Thomas Gorge of Longford. Despite Queen Elizabeth disapproving of the match and refusing to give her consent to the marriage, the couple married in secret in 1576.

The Queen inevitably learned of their deception, and Helena was exiled from court while her husband was imprisoned. However, with the help of influential friends, Helena found her way back into Elizabeth’s favour and the couple were granted property and estate in London and Wiltshire. After their ordeal, you could say the couple lived happily ever after in love and they were laid to rest together in Salisbury Cathedral. Like Ela Longespée, Helena outranked her husband and unusually for a woman of her time she married for love and against the wishes of Queen and Court. Helena’s story is one of love, acceptance and triumph over the confines of Middle Age society.

Much like Helena, Lady Katherine Grey also incurred the wrath of Queen Elizabeth I after her secret marriage to Edward Seymour, 1st Earl of Hertford. However, Katherine’s story did not end so happily. Both Katherine and Edward were imprisoned in the Tower of London where Katherine gave birth to their two sons Edward and Thomas Seymour. The Queen ordered Katherine be permanently separated from her husband and children, moving her to the care of Katherine’s uncle, Sir John Grey. Sadly, after being transferred through several charges, Lady Katherine Grey died at age 27 of consumption, confined to Cockfield Hall, Suffolk. Her story is one of love, sorrow, and strength. Strength in defying her queen for the man she loved, and strength in challenging a system fit for men. Katherine was a powerful woman whose very existence posed a threat to the Queen’s rule as she too possessed royal blood.

Originally entombed at Cockfield Chapel, Lady Katherine Grey’s body was later moved to Salisbury Cathedral where she was finally laid to rest alongside her husband, reunited in death. Her tomb is crafted with beautifully ornate and rather angelic imagery and is symbolic of a powerful noblewoman. The fact that her effigy lies considerably higher than her husband’s reflects her superior social standing. The fact that the couple were buried together tells another story – or maybe two. Did Edward choose to be buried with her, despite taking a second wife after her death in 1568, because she was his one and only love? Or, and much less romantically, was it a form of immortal social climbing, because of her high social status and its associations? Whichever we might believe, both are indicative of an incredible woman whose name stands proudly in our history.

Another powerful medieval noblewoman, who was without a doubt a crucial part of Salisbury Cathedral’s construction, went by the name of Alice Brewer. Although we don’t know much about Alice as an individual, we know that for the first 12 years of the Cathedral’s construction, Alice provided an estimated 15,000 tons of Purbeck marble mined from her quarry in Downshay, Dorset. The marble was used to construct the shafts, bases and columns of the magnificent structure – a spectacular 800-year-old legacy for Alice Brewer.

Our incredible Cathedral is steeped in rich cultural history which many great women are linked to throughout the ages. Those involved in the Cathedral’s early history certainly challenge the notion that medieval women were merely subservient; victims of an era which only served men. But how have women been represented in the Cathedral’s modern history? In the Chapter House you will find an ornate stained-glass window on which the brave women who worked to support their country through World War II are justly honoured. Women who served in the RAF, those who worked to keep our nation fed as members of the Land Army and Nurses who tended the wounded and dying. Their contribution is commemorated in Salisbury Cathedral and will stand for ages to come. These women stand overlooking Magna Carta as if supervising democracy itself.

Another heroic local woman, memorialised in Salisbury Cathedral, is Susan Elizabeth Gilbret Harris. Susan was a student at the teacher training college in the Cathedral Close who gave her life to save a drowning child in a nearby river. She did not hesitate to aid someone in danger even though doing so meant putting herself in danger. Susan Harris is remembered for her selfless act of heroism in the Cathedral’s visitor entrance where the beautiful depiction of an angel is carved into the window above the entrance doors; an inspiring image greeting all who enter Salisbury Cathedral. Below this image, reads

‘In memory of Susan Elizabeth Gilbret Harris who gave her life to save that of another.’

Just as women were here in the beginning, laying down the very foundation stones of the Cathedral, the women that have followed continue to break through traditional stereotypes. Today our talented stonemasons – among them Carol Pike and Sarah Klopper – expertly work towards the restoration of the Cathedral and with skilled hands repair the very same stone which Alice Brewer provided all those years ago. These skilled artists work in preserving our towering 123-metre-tall spire of hope, laying new foundations as Ela once did for new generations to come.

Amongst the sublime architecture, intricate carvings, and stained-glass wonders of the Cathedral, is an eternity of study waiting to be done; a forever bank of stories to uncover; an infinite bank of things you didn’t notice the first time. The stories of Salisbury Cathedral’s women are often a part of these, initially overlooked but astounding to discover. Of course, the incredible women working behind the scenes today, as well as our guides and volunteers who bring these stories to our visitors on the Cathedral floor cannot go unmentioned. There are many magnificent women who are integral in the running of the Cathedral and many who have yet to come. Salisbury Cathedral has always, and will always, owe much of its history to women and to these women, we are grateful.