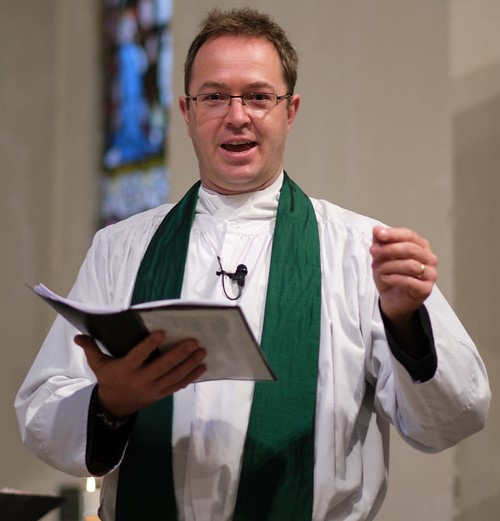 The Revd Dr. Kenneth Padley has been appointed Canon Treasurer at Salisbury Cathedral by the Acting Bishop of Salisbury, The Rt Revd. Karen Gorham. He succeeds Canon Dr. Robert Titley, who left the Cathedral earlier this year.

Kenneth will be installed as Canon Treasurer during Evensong at 16.30 on Sunday 12 June, when he will officially take up his post as one of the three full-time Residentiary Canons at the Cathedral, working alongside the Dean of Salisbury, the Very Revd. Nicholas Papadopulos.

The office of Canon Treasurer exists in many ancient English Cathedrals and traditionally involves responsibility for maintaining the fabric of the building and preserving its ‘treasures’. However, the Salisbury role has expanded in recent years to encompass sustainability and driving the Cathedral’s pledge to be carbon-neutral by 2030.

No stranger to major building projects having managed developments on two listed churches and three halls in his St Albans parish, Kenneth will work closely with the Works Yard team to complete the Major Repair programme and strengthen the Cathedral commitment to the environment. Last year Salisbury became the first cathedral to achieve a Gold Eco-Church Award from A Rocha UK, and the solar panel project undertaken by Salisbury Community Energy (SCE) won the Alan Clark Award for Best Local/Community Energy Project at the 2021 Solar and Storage Live Awards.

In his role as Canon Treasurer, Kenneth will also oversee the Cathedral’s acclaimed Visual Art programme. Through its Visual Arts the Cathedral has encouraged and challenged visitors and the congregation to explore ideas about society and faith.

Revd Kenneth Padley, Canon Treasurer designate said:
“I am delighted to be joining the team at Salisbury Cathedral and look forward to working with Gary Price, the Clerk of Works, and his team to protect and preserve this ancient building for future generations of worshippers and visitors. I am passionate about the potential of art, artefacts and architecture to share the good news of Jesus and am deeply excited about the scope of the Treasurer’s role to support this goal.

The Right Reverend Karen Gorham, Acting Bishop of Salisbury, said:
“I am delighted that Kenneth has accepted this post and will be joining the Cathedral as Canon Treasurer. He brings significant parochial experience to the role, which includes pastoral care, managing people and projects, and a creative and realistic understanding of mission and ministry for a changing church.”

The Very Reverend Nicholas Papadopulos, Dean of Salisbury said: “We look forward to welcoming Kenneth to the Cathedral and Chapter. He has been entrusted with a very significant task both as a priest and a member of the senior team. The Cathedral building is at the heart of our worship. It is the place to which pilgrims and visitors have come for hundreds of years, and it will be his job to ensure that they are able to do so for many years to come.”

Kenneth found his vocation early, aged 12. He recalls vividly being given a New Testament and Psalms by the Gideons shortly after moving to secondary school. Others threw their books away, but Kenneth kept his.

Revd Kenneth Padley said:
“I realised at that point that going to church was either something that granny did or something that was of life-changing significance. It was important to me and has remained so.”

After gaining a First Class Honours degree in Modern History at Exeter College, Oxford, he became a Lay Assistant at St Barnabas in Dulwich and trained for ordination at Ripon College Cuddesdon, near Oxford, gaining a BA in Theology and a Master of Studies in Ecclesiastical History. He completed the hattrick in 2016, gaining a DPhil at Corpus Christi College, Oxford. After a spell as an assistant curate in Central Swansea, he worked as Warden of Church Hostel, Bangor and Chaplain to the University of Bangor.

Kenneth is currently Rural Dean of St. Albans and Vicar of St Michael’s Church, probably the oldest site of known Christian activity in the British Isles. He will move to Salisbury with his wife Anna, a teacher, and son Alex later in the year. He lists his hobbies as travel, cycling, poetry and is (he admits) a diligent but somewhat reluctant gardener. He is looking forward to having a smaller garden than his current one when he settles in the Cathedral Close.