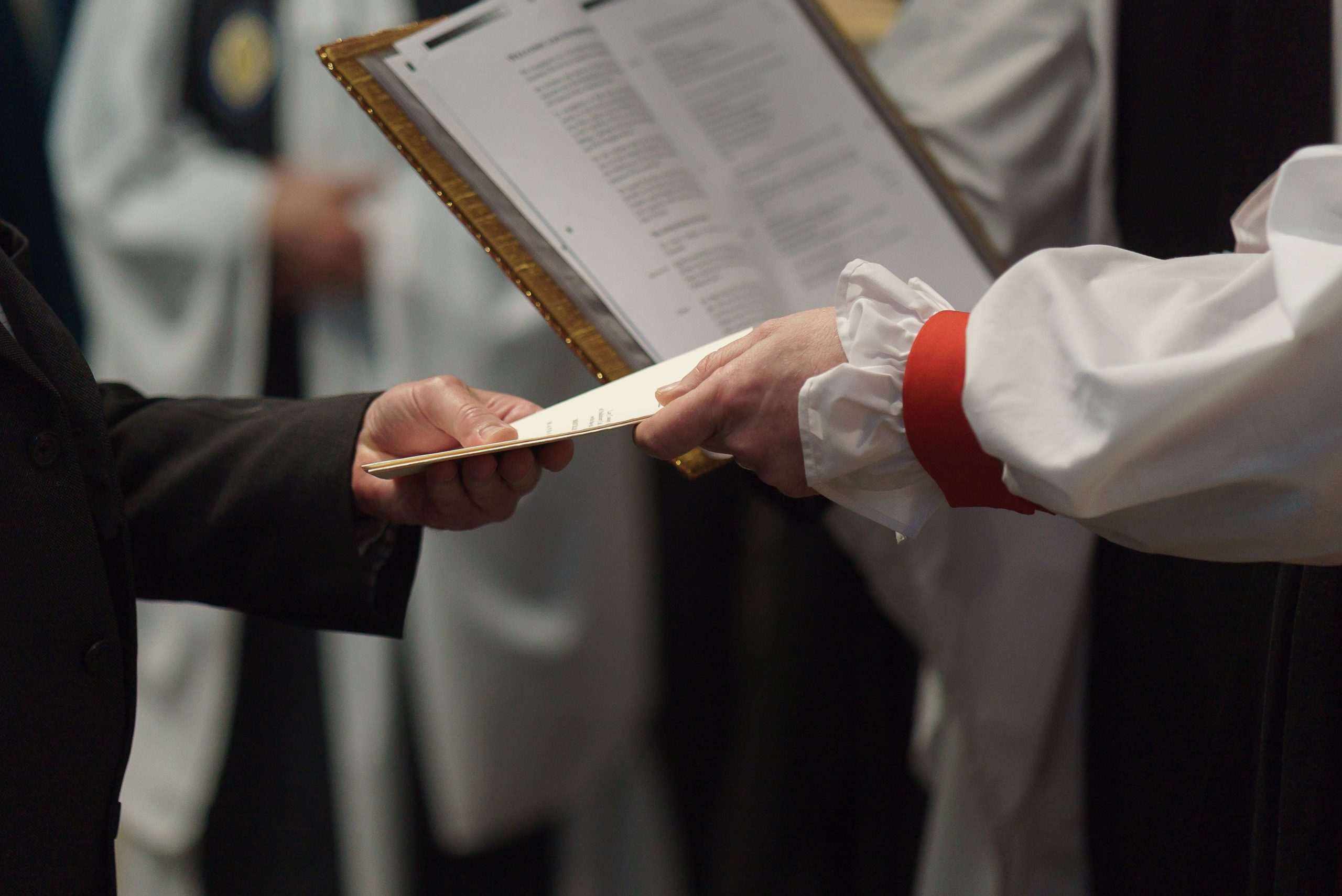 A sermon by Canon Nigel Davies, Vicar of the Close.

This story of Jesus raising Jairus’ Daughter to life is one of my favourites as it appears tonight in Mark’s Gospel and as it appears in the other two synoptic Gospels. If memory serves me well this was the kind of passage – a story driven passage from the New Testament – seemed to crop up with regularity at Evensong, which I attended as a teenager. Such passages probably gave the preachers a greater opportunity to unpack the passage for teaching purposes. Jesus would be the exemplar in the story and the preacher would reflect upon what Christians could learn from Jesus’ approach to pastoral ministry.

The disciples would often be held up to examination and the preacher would explain how the way they went about things was not always the most appropriate. Usually, their behaviour enabled the preacher to highlight the wrong approach and juxtapose that with the right approach, which would be that of Jesus.  What then might we extrapolate from this passage about appropriate engagement in the pastoral ministry?

Firstly, we should note that Jesus responded swiftly to Jairus’ request. Jesus might have been trying to escape and find some peace, after all he had earlier dealt with Legion, but Jesus quickly focused on Jairus and his need.

It isn’t always easy to be so ‘in the moment’ as Jesus was, but is an essential prerequisite of any pastoral encounter. People will soon become aware if the person who they are seeking help or advice from, is distracted. Sadly ‘I know you are very busy but…’ has become an opening mantra, when someone is seeking out a minster or priest these days.  Like Martha last week, clergy are distracted with many tasks and the good ship pastoral engagement, runs aground on the rocks of too much to do and not enough time to do it. If clergy, if Christians, are to engage effectively in Pastoral Ministry ‘unconditional positive regard’ is essential.

This is further demonstrated by Jesus as he sets off to the house and is surprised by the woman touching his cloak. Now I suppose he could have continued on his way to Jairus’ house, knowing that a cure had been affected, but it was important that the woman was reassured about her cure and Jesus was ready to do this. Jesus was able to transfer his ‘unconditional positive regard’ to affirm her. She went away from the encounter with Jesus with her self-esteem rebuilt.

Due to the delay, news comes from Jairus’ house that his daughter has died. At that point, Jesus’ attention returns to Jairus and you will note that Jesus, who until that point had been surrounded by a crowd, extricates himself and Jairus from the press, sensitive to the fact that Jairus was probably distraught at the news. So, three trusted disciples, Jesus and Jairus in turmoil, make their way to the house. Jesus managed the situation, so that the grieving father had the necessary space and given his position in the community, he wasn’t forced to put on a ‘brave face’ and could give expression to his feelings, unobserved by a crowd. This is something that is often necessary when we face difficult pastoral situations. It is essential to remove additional people from some pastoral encounters, to allow no distracting presence, or well-meant inappropriate words or actions. We can only guess at the words of comfort that Jesus may have spoken to Jairus, or they may have walked in silence. Silence can often be helpful in fraught pastoral encounters, just so long as close attention is maintained.

You will note too that Jesus removes the crowd which has gathered at the house. Again, it is to give Jairus and his family space, however well-intentioned their presence was meant to be – they had gathered to mourn and to accompany Jairus in his grief. Not such a bad thing in itself, wanting to show sympathy and be in solidarity with the grieving family.  However in such pastoral encounters, too many people can be overwhelming and unhelpful even if well intentioned.

It is unlikely that we will restore a departed loved one to their family, as much as we would want to, so that part of the pastoral encounter with grieving loved ones is not in our gift, but there are still a couple of things to note. Mum and Dad were in attendance when Jesus gently called her back to life, which would mean that as she sat up, she wasn’t faced by strangers making a commotion, just a quiet and compelling presence of Jesus, flanked by her parents – I tend to think that the disciples were probably at the door looking on, rather than in the room.

The next thing that Jesus does is show his concern for the little girl as he ‘directed them to give her something to eat.’  Jesus ‘unconditional positive regard’ now focuses on the girl and he is aware that she would have physical needs, such as hunger, especially if the illness had lasted several days.

Well, I don’t know if I have done as good a job of reflecting on this passage and drawing out important lessons about pastoral engagement, as I seem to remember the preachers from my youth did, but since the 2nd Letter to Timothy, tells us that all scripture is useful ‘for teaching, rebuking, correcting and training in righteousness’ some of what I have said about this passage, maybe have been of some assistance.