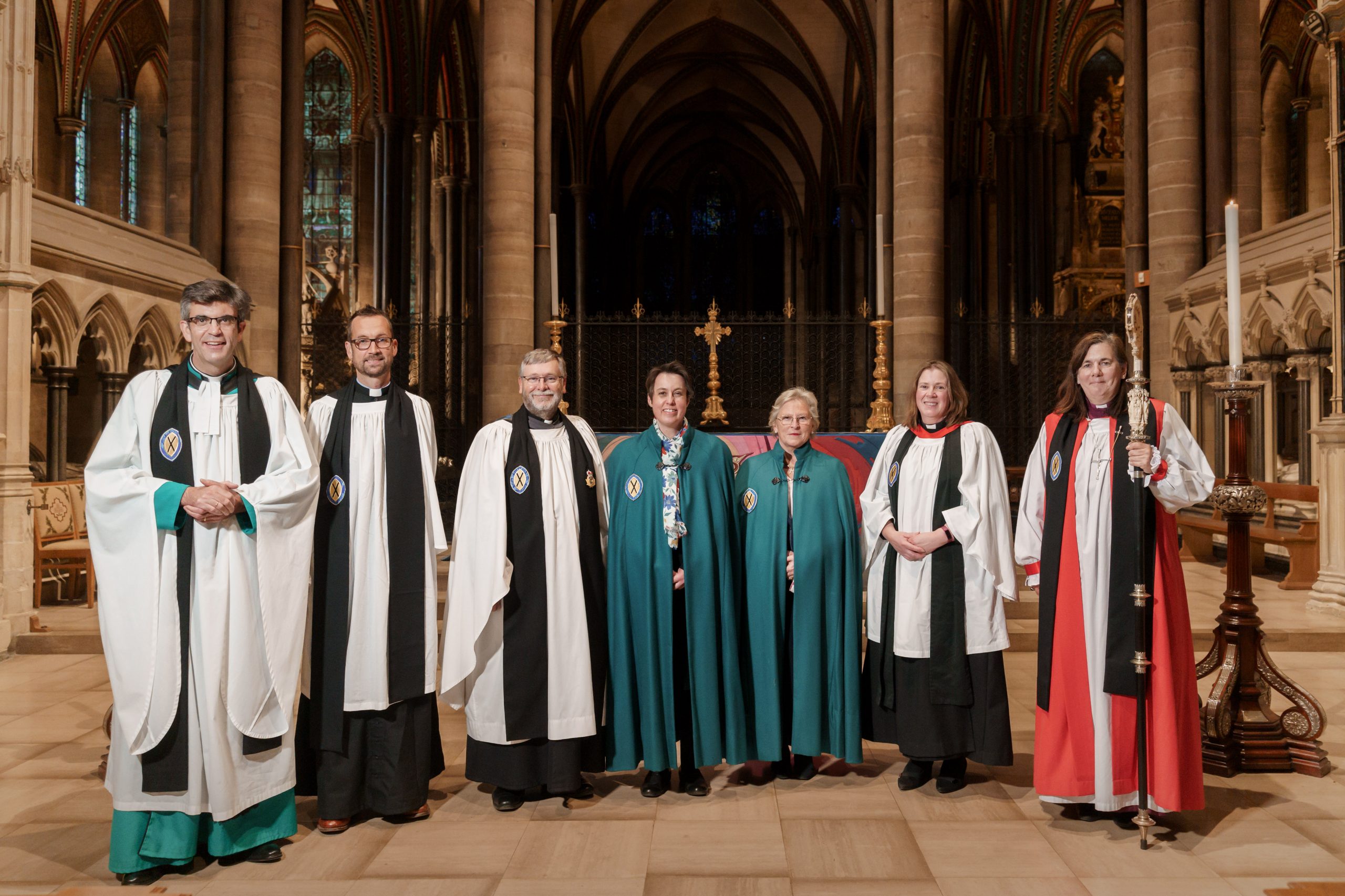 Five non-residentiary canons, each of whom has pioneered new ways of sharing and nurturing Christian faith, were installed as members of Salisbury Cathedral’s College of Canons during Evensong on Tuesday 5 October.

Dr Jill Hopkinson, a tutor in Rural Ministry and Director of Studies at the Centre for Formation in Ministry at Sarum College, leads the only course in the country which specifically trains and equips people for the challenges of ordained ministry in the countryside; the Revd. Paul Bradbury is the founder and leader of Poole Missional Communities, an organisation that seeks to explore new forms of ministry (something all places of worship have had to do in the recent pandemic);  Sarah Musgrave is a psychotherapist with extensive experience working with children and adults who have experienced trauma, abuse, and rejection; a former banker, the Revd. Simon Evans has been involved in police chaplaincy for 15 years and is now the Lead Chaplain, seconded to the Dorset Police; and the Revd. Dr. Stella Wood, Chaplain at Bishop Wordsworth’s School, has put her years of work in education at all levels to good use, conducting a research project on the history of rural Church attendance, resulting in the publication of an article in History Today.

Commenting on the new appointments The Dean of Salisbury, the Very Revd. Nicholas Papadopulos said: “During lockdown the Cathedral was forced to find new ways to communicate with its community and to speak more widely. We will use much of what we learnt during those difficult days as we go forward, and we will certainly benefit from the insights and experience of these new canons, each of whom have found ways to share their faith differently.”

Dr Jill Hopkinson is Tutor in Rural Ministry and Director of Studies at the Centre for Formation in Ministry at Sarum College in Salisbury.   Between 2004 and 2018 she was National Rural Officer for the Church of England working for the Archbishops’ Council and based at the Arthur Rank Centre. She originally trained as an ecologist and agricultural scientist, completing a MA in Theology at the University of London in 2017.  Jill lives in a village in Warwickshire, where she is involved in environmental projects, co-leads Messy Church and Sunday children’s activities in her home benefice, as well as regularly leading worship.  She is a volunteer with Farming Community Network.

Paul Bradbury is an ordained pioneer minister based in Poole. He is the founder and leader of Poole Missional Communities which plays host to a number of fresh expressions and pioneer initiatives. Part of his time is also given to freelance teaching, training and writing in the area of missional ecclesiology. He is currently studying for a Doctorate with Church Mission Society and the University of Roehampton.

Sarah Musgrave is a UKCP registered psychotherapist (United Kingdom Council of Psychotherapists).  Her first degree in Psychology evoked her interest in mental health and wellbeing. Her M.A. focussed on child therapy and for many years she worked with children and adults who had experienced trauma, abuse, and rejection.  Following her psychotherapy training she has worked with adults, in her own practice, from home. As a Licensed Lay Minister in the Marlborough Team, she contributes to the Salisbury Diocese as a Discernment Adviser for Licensed Lay Ministry, a therapist for lay and ordained personnel, a Bishop’s Visitor, a member of the Diocesan Wellbeing Group, as Lay Chair for the Marlborough Deanery and through contributing to Vocations Days and tutoring Licensed Lay Ministers. She has also contributed a chapter towards the St Aldhelm certificate. Sarah is married with two children and lives near Marlborough.

The Revd Simon Evans began his working life working for the NatWest Bank in Mayfair, London, and began studying for the Institute of Bankers Exams. He trained for the ministry at Salisbury & Wells Theological College and was ordained deacon in Canterbury Cathedral in 1984 and priested the following year in Southwark Cathedral. His title parish of St.Stephen’s Norbury & Thornton Heath was in the Croydon Episcopal Area, which was transferred from Canterbury to Southwark Diocese that year. He moved to the large parish of Putney, where he was also Chaplain to the Sea Cadet unit located on the Thames. He then moved to St. Thomas’ Telford Park (Streatham Hill) where he served as Priest-in-charge, then Vicar. In 1993 he began his ministry as a Police Chaplain, serving at Streatham Police Station. He got involved in the National Association of Chaplains to the Police (now Police Chaplaincy UK), where he served two terms as the National Treasurer and, after moving to Dorset, the South West Regional Co-ordinator. Simon Evans moved to the Diocese of Salisbury in 2004 to the parish of Ensbury Park in North Bournemouth. He has served on the Diocesan Healing Advisory Team, as Chaplain to the Mothers Union and as the Dorset Ecumenical Officer. In 2006 he was invited to become a Chaplain to Dorset Police and is now the Lead Chaplain seconded to the Force for one day a week. He is married to Christine, who has recently retired and has three adult sons. His hobbies are bird-watching, an interest in aviation, having made three parachute jumps, and heritage railways.

The Revd. Dr. Stella Wood studied for six years at Trinity College, Oxford, and was awarded a doctorate in 19th century Church history, exploring the dawn of the ecumenical movement. After ordination in Salisbury in 1997, her entire ministry has been spent in education, working across all age groups from 3-year-olds to people in their 70s, and teaching history. She is currently Chaplain at Bishop Wordsworth’s School and convenes the informal group of ordained Chaplains in schools, a diverse and deeply impressive asset to the diocese.  Stella contributed to the Theology Quest and Questions programme at Sarum College for 12 years and devised the Aldhelm Certficate course for the diocese. She also ran a research project for several years exploring the history of rural Church attendance, resulting in the publication of an article in History Today.
Stella is married to Mark, Rector of Wilton and they have three children.