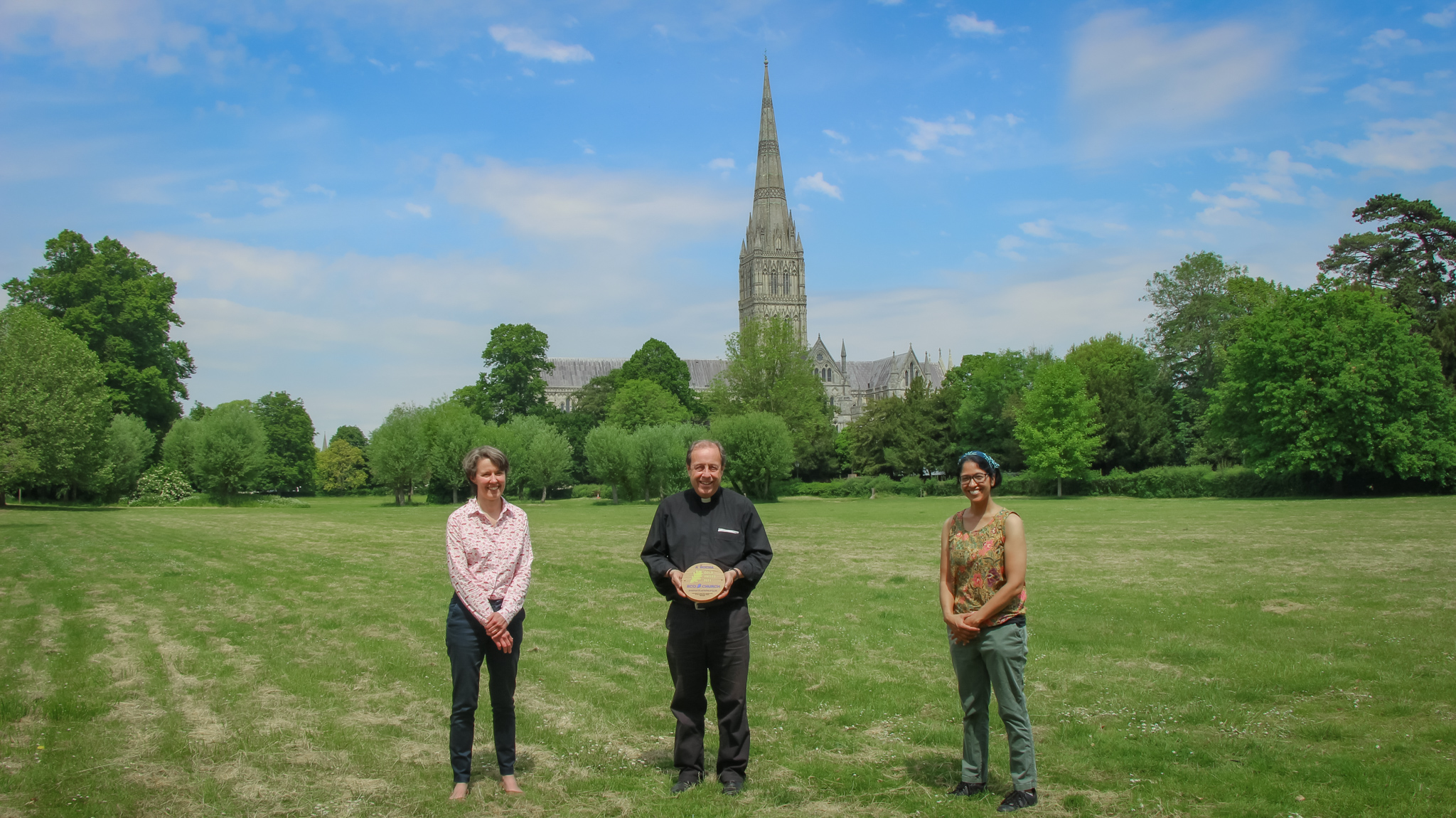 On Wednesday 16 June, Salisbury Cathedral became the first cathedral in the UK to achieve a Gold Eco-Church Award from A Rocha UK, a Christian nature conservation charity. The awards singles it out as a beacon of good environmental practice for churches addressing the climate crisis.

Helen Stephens, head of the A Rocha UK’s Eco-Church initiative, presented the award to Canon Robert Titley, the Cathedral’s Canon Treasurer, after touring the Cathedral and surrounding land to see and hear for herself what the Cathedral and its community have been doing towards achieving their Gold Award. Also present when the award was handed over was the Bishop of Salisbury, The Right Reverend Nicholas Holtam. Bishop Nicholas, until recently the Church of England’s lead bishop on the environment, is due to retire next month after ten years of service in a largely rural diocese, where the first hand the effects of climate change are witnessed daily.

Presenting Canon Robert with a wooden plaque to mark the Cathedral’s achievement, Helen Stephens, head of the A Rocha UK’s Eco Church initiative, said:
“With 5 months to go until COP26, this is an exciting milestone for one of the most important cathedrals in the UK. Without the team’s determination during the last 3 challenging years this wouldn’t have been possible. This shows that even large cathedrals can help restore the environment but also how caring for the environment has enhanced Cathedral life in so many ways. In other words, everything from how the Cathedral worships and what food it serves, to the energy it uses, the wildlife that lives in and around the Close, and even the water that flushes from the loos.”

Responding to the award the Cathedral’s Canon Treasurer Robert Titley said:
“The Eco Church Award scheme channels concern for our planet into positive action rooted in joy at God’s creation. Going for gold has mobilised the Cathedral’s worshippers, volunteers, staff, and local residents, and it has drawn in the energies of many partners, like Salisbury Cathedral School, our Friends organisation, and the Harnham Water Meadows Trust. They all have a stake in this award.”

The Bishop of Salisbury, Right Reverend Nicholas Holtam said:
“I am thrilled that the Cathedral has got this Gold Eco Church award particularly because it comes just before I leave and because I hope it will be an encouragement to other churches, cathedrals and dioceses. It is really clear as we prepare for the climate talks at COP26 in Glasgow later this year, that the environment needs to play a central part in all of our lives and that it matters hugely from a faith perspective.”

The Eco Church award is based on a comprehensive survey covering topics as diverse as worship and teaching, management of church buildings, land, community, and global engagement and lifestyle. It is designed to bring together a national community of churches addressing the environmental crisis, using a common framework, an online toolkit, learning and speaking up together.

Now in its sixth year, there are 3,500 Eco Churches in England and Wales – more than 5% of churches – enrolled in the Eco Church community.  A Rocha UK is aiming, by 2025, to engage at least 15% of churches in on-going action to protect nature and address climate change through the free scheme. – a goal that is even more significant this year given the COP26 climate negotiations in November.

Among the initiatives that earned the Cathedral its Gold Award, are a pledge to make the Cathedral carbon neutral by 2030, the installation of solar panels on the South Cloister roof, the provision of a habitat to support endangered peregrine falcons on the Cathedral Tower and an ecological survey mapping the Close and Cathedral School grounds – both havens for birds and wildlife.

The survey led to the discovery of a patch of rare Fiddle Dock, which may date back to the presence of cattle in the Close in the 19th century and another interesting fact came to light as a result of the overall project – it turns out that the embedded carbon in the ancient Gothic building is low, despite the 60,000 tonnes of stones it took to construct the building. This is because of the labour-intensive construction methods used by 13th and 14th century builders, who were also imaginative recyclers, packing the gaps between stones with oyster shells, the fast-food of their day.

The Cathedral has also sought to improve conditions for native wildlife living on its land, introducing bird boxes, bat boxes, a bug hotel and hedgehog boxes. There is also a pond, and there are wetland areas. Plants are grown that are favoured by birds, bees and butterflies, and viewers from 88 different countries have been able to watch the four peregrine falcon chicks grow and fledge via live streamed cameras set up around the nestbox.

Since the peregrines returned to the Cathedral in 2014, after a 60-year absence, staff and volunteers from the RSPB and Wiltshire Ornithology Society, have documented the falcons’ lives in picture and on video, learning and sharing information about the ecology, biology and behaviour of these intriguing raptors. The peregrine team’s next steps are to help develop a conservation action plan to identify the most effective way to preserve not just this flagship species, but other animals and birds living in and around the Cathedral,

For any further information or arrange interviews please contact:
Tamsin Morris, Press Officer, A Rocha UK on 020 857 45935 ext 2006 or tamsin.morris@arocha.org
or
Marie Thomas, PR and Travel Trade Manager, Salisbury Cathedral on 07857 144691 or m.thomas@salcath.co.uk