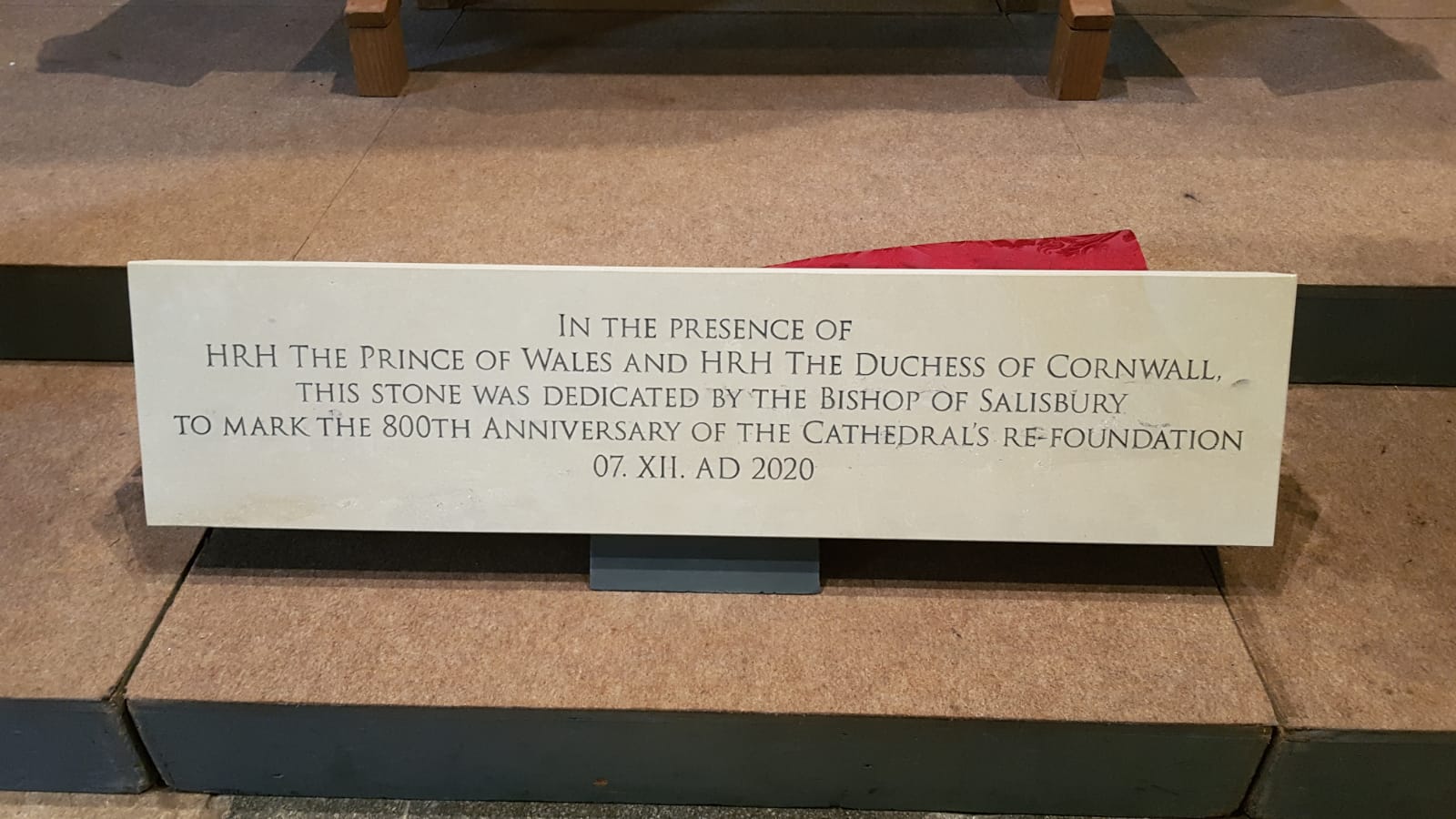 Canon Robert Titley, Treasurer (video at the bottom of page)

The Fifth of November; the Fourth of July. There are some dates that have cemented themselves in national calendars because of what happened on those days. There are two dates we may not remember in the future but which are ringed on many kitchen calendars just now. The first is June 21, the day Covid restrictions might really ease off, though that looks less secure now with the so-called Indian variant. The other date, though, despite pressure, remains solid; and it’s tomorrow. From Monday May 17, many places will be opening up to visitors, and among them will be us. On Monday and Tuesday we’ll invite cathedral volunteers, partly as a thank-you and partly to test things (like a new ship on sea trials); and we welcome the paying public from Wednesday.

There will be new things which we hope will make them feel welcome indeed. There is a fine new stone ramp leading into the cloister (the old, very steep ramp was for some people the most exciting moment in their visit) and a beautifully restored cloister door. The old welcome desk that looked like passport control has given way to an elegant, sinewy new creation. Inside, new interpretation will present the Cathedral as a living community of faith as well a place of history. And our volunteers and staff will be as warm as ever they were, even with masks on (you can say a lot with eyes). Do keep all this in your prayers. And do notice the number of times I’ve said ‘old’ and ‘new’.

Our hope is that Wednesday 19 May will indeed be a date we remember, a moment when our Cathedral’s story turned a fresh and fertile page. During the vaccinations, people who had long lived in Salisbury came into the cathedral for the first time in years – or ever. We hope they will come back, and be joined by others who visit and (as things become easier) worship here for the first time.

A church that lives and grows is an interesting place, and not without its tensions, as the old meets the new, because if that is a genuine meeting, nothing remains unaltered. We see this dynamic in the Acts so the Apostles, which supplies our first reading. This morning we meet the community of the resurrection. At its core are the friends of Jesus (the ones he prays for in the gospel reading the night before his death) who knew Jesus in his ministry and the bewildering experiences of Easter. So when they need someone to replace Judas, who handed Jesus over to his death and is now dead himself, their leader Peter is clear in his statement of need: they must have someone with deep roots in the movement’s past, someone who ‘accompanied us throughout the time the Lord Jesus went in and out among us’ and who can therefore be a ‘witness to his resurrection’. Matthias is chosen – and then disappears from history, rather like Ian Stewart, the forgotten Rolling Stone.

As we turn the pages of the book of Acts, however, things will change. People will join the movement who never knew Jesus in the flesh, and problems will arise. Most of the newcomers will be followers but some will lead, most notably a man called Saul (later Paul). Not only will he have no roots in the Jesus movement, he will have been actively persecuting the followers of Jesus. Yet, after his conversion, he too will be called an apostle, and through him, gentiles as well as Jews will be drawn into the movement.

What will bring about this change is what we shall celebrate next week, at Pentecost, the pouring out of God’s Holy Spirit. This fresh gift of God will not cancel or ignore the past, but it will give power to move into new discoveries of God’s generous purpose. I mustn’t steal Canon Anna’s lines as our Pentecost preacher, so here, to bridge the gap, are some things to think about between now and then: places where we or others have to undertake the task of honouring what is from the past and embracing what might await us. We might call it not robbing Peter while still paying Paul – though it’s not just a churchy preoccupation.

For instance, while the Labour Party ponders how to honour voters who have been its people in the past, the Conservative Party is thinking  about those same people, and what needs to change if they are to be part of the future – while still honouring those who have voted Conservative in the past.

Yesterday, 15 May, marked (in the western calendar) the anniversary of the establishment of the independent state of Israel, but for Palestinians it was the Nakba, the day of catastrophe. 70-odd years of a shared past that has been experienced in utterly conflicting ways. What can arise from that to open some future path that each can embrace? As we pray for yesterday’s dead and wounded, pray too for Hady Amr, the latest US envoy to the Middle East.

Today marks the final day of Christian Aid Week – it’s not too late to donate – with its focus on Kenya. The face of the week is Rose Katanu Jonathan. Aged sixty, Rose can spend all day fetching water for her grandchildren. ‘Because of climate change,’ she says, ‘I worry a lot about food. I pray to God that the rainfall will become normal like it used to be.’ What future is there that will work for Rose without ignoring, say, the poor family in rural Wiltshire that need their thirsty old car for work, for school, for shopping, for everything?

And then there is the church. In a process a little more elaborate than the one that appointed Matthias, we are seeking a new bishop of Salisbury, and Dean Nick has played a pivotal role in drawing up the statement of need. The new chief pastor of our diocese will face many challenges (rather an overused word) among them the challenge that makes all the other challenges even more challenging.

Look at many a congregation and you see – there are various reasons for this – how each generation of Christians in England has not managed to pass on faith to the next generation as effectively as it received it from the generation before. Ponder what that means for our future, and ask, what must Peter and Paul learn from each other if that chain to be broken?

All this sounds like a shedload of work, and just as we make our faltering steps out of lockdown. Next Sunday’s story, though, is about an energy this not our own. In the things I have sketched, there are a lot of things we could get wrong, but next Sunday’s story is about wisdom as well as energy. So between now and then, let us pray for one another for that gift of God’s Holy Spirit: